Of the 120 or so institutions of higher education that play Division I men's football in the United States (that's Division I-A, so it doesn't include I-AA schools like the Ivies), exactly four of them do not have either "College" or "University" in their names.

(ETA: Originally the question said "five" - I have since confirmed that I was wrong about one of them.)

I've posted this on Facebook a couple of times already, but it's probably worth posting here as well, for those who might not see it over there:

I've gotten a free pair of tickets to see Wyatt Cenac (of "The Daily Show") tape a stand-up comedy special for Comedy Central this Saturday evening here in Manhattan. Anybody interested in going with me?

My Uncle Barry, a professional photographer, has started a new blog: Take Better Pictures. Looks like some great stuff in there for the hobbyist or anybody looking to get even a little bit more serious about their photography.

A couple of weeks ago, my firm assigned a brief to me and another associate in a National Labor Relations Board case the firm has been involved with for a few years. We're each writing one of the two issues in the brief. The catch, though, was that in addition to all of our regular work, preparation for writing this brief would include reading the 16,000 pages of transcript from the actual courtroom proceedings in the case, which were held in federal courts in New York and Washington, DC this spring.

That's not a typo. I said sixteen thousand pages.

I've managed to fit some in among all the other work, but when I'm in the office, phone calls and e-mails come in constantly, and other things require my attention (like my sixty active civil service cases). It's great to be busy and in demand at my job, but it isn't conducive to settling down with a couple of boxes full of paper and giving them my full attention for several hours.

So here I am working from home today. I've gotten through a decent chunk already, but with tons more to go - and naturally I still have occasional other things coming my way via e-mail (I haven't checked my work voice-mail yet, but I certainly will soon). I'm also getting hungry - and I immediately knew what I had to do.

SeamlessWeb was started several years ago by a couple of New York City lawyers who were frustrated by the complexity of getting their firm to reimburse them for meals they ate when they were working late at the office, but it expanded way beyond that in the following years. The vast majority of delivery restaurants in Manhattan, and many in other boroughs as well, are now on SeamlessWeb's network. You just go online, give them your credit card and address once, and forever after, it will tell you which restaurants deliver to your location and which of those are open right now, and you select from an online menu.

Even in my relatively sleepy residential neighborhood, it's still Manhattan - 101 restaurants on Seamlessweb.com deliver to this address. It's a beautifully efficient method of ordering a meal, and I've probably used it close to a hundred times since I discovered it in... oh, I don't know for sure, 2005? They're also in a few other cities, though I can't remember any offhand beyond Philadelphia.

Anyway, there's a rather large burrito winging its way to me shortly, courtesy of SeamlessWeb and Burritoville. It's going to help get me through the next few thousand pages of testimony. I hope y'all are having a nice day and a good lunch.

If a giant crane is going to collapse a couple of blocks from your apartment, destroy a couple of buildings, and kill a couple of people, try to avoid being on a plane to Reno and unreachable when it happens. It sure does increase the voicemail and e-mail volume for the rest of the day. 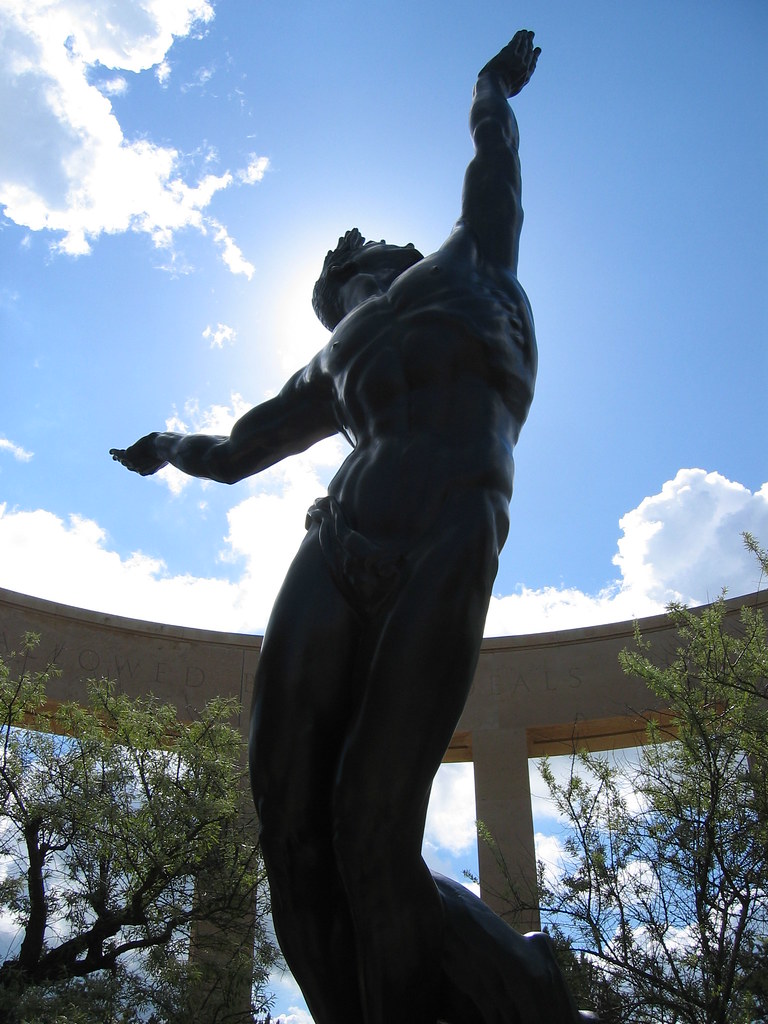 The Spirit of American Youth Rising From the Waves, by Donald De Lue

It occurred to me yesterday, while I was riding my bike 60 miles, that I haven't updated my Team in Training blog

tucsonorbust since I stopped raising money a few weeks after riding 109 miles in El Tour de Tucson. As I'd mentioned at around that time, TNT asked me to be Fundraising Captain for the NYC team doing the Montauk Century on May 18 and "America's Most Beautiful Bike Ride" (a.k.a., the Tahoe Century) on June 1. I've been training with the team, but because of my schedule, much more sporadically than I did last year.

So I still may not update that blog much, at least not until it's actually time to ride Montauk and/or Tahoe - and after that, if and when I start training and fundraising for El Tour de Tucson again. But I thought it was worth mentioning at least that I rode my bike 60 miles yesterday, and survived. I also thought it was worth mentioning to anybody who might want to "friend" that other LiveJournal so that they can be on board whenever I do start updating it more regularly again.

I need to be doing these rides far more frequently if they're to have any hope of helping me get ready for another century after the relatively sedentary winter I've had. And that's all I'm going to say about that for right now.

Back in 1995 when I first joined a group of musicians in Dryden, NY who fancied themselves a nascent band, the bassist (and basement rehearsal host) was a gentleman named Dave Brown. In addition to being a senior member of Cornell's Extension community and a Food Science instructor in the College of Agriculture & Life Sciences, he was a well-known and highly regarded cheese judge. He'd also been in bands just about as long as there'd been such a thing as rock and roll, and he kept a solid beat and sang good backups. Moreover, Dave was a quietly funny guy who knew how to keep rehearsals light but productive.

I eventually named the band "Revolving Door" based on our inability to maintain one, stable lineup, but Dave was one of the original members. We had only played out a few times (in fact the userpic for this entry is a photo from one of those gigs, at the Savoy in Watkins Glen) before there were a few more personnel changes, and Doug Dann took his place, later to be replaced himself by Jim Smolos. Revolving Door went on for another few years, while Dave continued to be a strong part of the central NY music scene in a variety of capacities, both in bands and otherwise.

Dave passed away this week at the age of 63. His music and his laughter will be missed.
Collapse